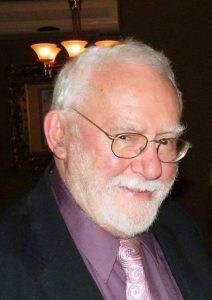 John D. Brulé, 91, of Syracuse, passed away on August 6, 2018 surrounded by his family. John was born in Hancock, Michigan and had been a resident of Syracuse for over 60 years. A passionate seeker, John’s life was spent educating himself and others around the world on how to achieve peace and justice. His travels took him from Selma, Alabama to the Philippines; from China to Buenos Aires; and too many other destinations to mention. Hand in hand with strong women and men, he worked tirelessly to build a better world for all. He also was a professor of Electrical and Computer Engineering at Syracuse University, and was frequently recognized for his superlative teaching skills. He brought computer technology and email to the Philippines, and robotics to China; with Sally, he brought Mobile Art Forms to craft fairs around the country. He was the recipient of an honorary doctorate from the University of San Carlos in the Philippines as recognition for all the work he had done supporting that school over the course of four decades.

He is survived by his loving second wife of 18 years, Dolores; his son James (Jill) Brulé of Fayetteville, his daughter Nannette (Brian) Frost of Syracuse, his son Mark (Francine) Brulé of San Diego; seven step-sons and step-daughters; numerous nieces, nephews, grandchildren and great-grandchildren, living all around the world.

He was pre-deceased by his first wife Sally (Corp), his brother Warren Brulé, and his sister Janet (Pettengill).

Services will be Saturday morning, August 11 at 10:00 am at All Saints Church located at 1340 Lancaster Ave in Syracuse; calling hours will be Friday evening August 10 4:00-7:00 pm at the same location.

In lieu of flowers, donations may be made to the Jail Ministries of Syracuse or the ArtRage Gallery.