With everything seemingly in place, we scheduled our second trip to the Philippines to occur in June 1978, some ten years after our return from the first trip. For this trip only Mark accompanied us. Nannette stayed at home in Syracuse and Jim was married and on his own with Jill. This meant taking Mark out of High School during his senior year, and this was pretty heavy on him. So we talked it all over, including Nannette, and decided that after the first of the year Mark would come back to Syracuse to finish out his year at Nottingham. He and Nannette would take care of the house. By the time he flew back he would be 17 years old and Nannette would turn 21 shortly after he arrived back in the states, so we figured it should all work out OK. We planned on returning late in May 1979 so we could participate in Mark’s graduation.

Our packing and planning for the trip went easier this time because only three of us were going, and we were not renting out the house. Sally decided to take her Perkins Brailler with us, along with a supply of Braille paper. Just about this time, Spring of 1978, I found out about a computer put out by Radio Shack – the TRS 80 Model I. I decided I should take one, but the waiting list to obtain one was quite long. I found out that my colleague, Ming Hu, had one on order and he said he would let me take that one and he would wait for the next one to come in. It had 16 kilobytes of memory and the mass storage was a cassette tape. This computer cost me $4000. The programming language was BASIC II, and I wondered what I would do with it over there. After talking with another colleague, Ed. Stabler, I decided to buy an assembler that would allow me to write programs in a language called Assembly language, and run them on the computer. While I had written assembly language programs for the IBM 650, I had never written an Assembly language program for this machine, but I was sure Mark and I could figure out how to do that once we got to the Philippines.

So, late in June 1978 we had everything ready and made our way to the airport. The route was to fly to Detroit, flying time about 1½ hours, and change planes there to fly nonstop to Tokyo, 14 more hours. We flew in to Narita airport and had a 3-hour layover until the last leg to Manila, another 5 hours flying time. So, it takes about 24 hours to fly from Syracuse to the Philippines. During daylight saving time Manila is 12 hours ahead of Syracuse so leaving Syracuse in the morning of one day gets us into Manila in the evening of the next day. Of course we get that day back on the return trip.

All went well on that trip, and we were met at the Cebu City airport on Mactan by a delegation from the University. There were many old friends to greet us, and it was a joyous reunion. The University had found a house for us to rent, and we were able to locate Remey and hire her again to be our cook and chief of the help. This house was in a different part of Cebu City, called Guadalupe Heights, and it was a gated community. It was a relatively new house and rented to us by a faculty member in the History department.

There was a new chairman of the Electrical and Communications department, Dennis Bermejo, and he was thrilled to see the computer. This was the first digital computer to be introduced in the Philippines outside of Manila and created quite a stir. The Dean of Engineering was still Pedro Yap, but now there was a Filipino President of the University, Father Alingasa. The first Filipino President of the University was Fr. Amante P. Castillo and he was appointed in 1970.

Dennis was quite anxious to start a Computer Engineering program in his department, and my arrival with the computer helped that endeavor. Dennis and I became a sort of traveling road show, as we went from school to school showing the computer and talking about what it could do. In this way I met Dean Waldon Rio, the Dean of Engineering at Central Philippines University in IloIlo, Panay. Dean Rio was very active in attempting to improve the quality of Engineering Education at schools outside of Manila, and over the years he and I became working colleagues. IloIlo is a fairly small city, and had a very limited social life. I remember one night when Sally and I had been out to dinner and were heading back to our hotel; we were well aware how dark the streets were. There was little or no street lighting and the sidewalk/road was quite rough. We looked at each other and said: “Did you ever imagine that at our age (52) we would be in such an isolated spot, stumbling along in the dark in a strange world?”

My contributions at the University of San Carlos during this time were mostly in the area of teaching remedial courses to faculty members, developing new material for them, and teaching an undergraduate course. This gave me plenty of time to study over the TRS 80, and find out what this assembly language programming was all about. Just before we left Syracuse I had heard about a new cryptographic process developed by Ron Rivest et. al. at MIT. This is known as a public key cryptosystem. I had learned of it from an article in Scientific American written by Martin Gardner. I took a copy of that article with me to the Philippines and while I was there I wrote all the code, in assembly language, to implement the process. This was enormously difficult on my TRS 80 because the only mass storage I had was the cassette tape, and this did not lend itself well to writing and editing programs. Fortunately I had the foresight to take along a copy of Knuth’s book, volume 2 of Seminumerical Algorithms, and this had all the mathematical background I needed.

Mark and I worked on that together, and I remember that around Christmas time of 1978 we took a jeepney to Talamban and spent the day writing and debugging code. This may actually have been done on Christmas day. Poor Sally was a computer widow pretty much after I learned how to program that TRS 80! Mark sat in on a course in computer arithmetic that I taught, and it seems that that helped him in his later work. Also, I encouraged him to take a course in Physics feeling that he should have more physical background than just math or software. It turned out that the teacher for the Physics course was very good, and he and Mark got along famously. Mark left for Syracuse in time to start his final semester at Nottingham High School and I feel he was glad to get back with his Syracuse friends. The academic work he did at San Carlos put him ahead of his peers at Nottingham, and that made his life somewhat better.

A rather remarkable event caused a big change in Sally’s life that added an entirely new dimension to her activities.

Sally had brought her Perkins brailler and some work to be done for the Onondaga Braillists Organization (OBO). This wasn’t enough for her since it kept her in the house all the time. So she again was casting about for something to do, and she heard about a place that worked with disabled people. This was called the Area Vocational Rehabilitation Center (AVRC). It was located in a different part of Cebu City so she took a cab there to find her way. There was a young blind woman there and Sally thought she would check to see if she needed someone to read to her or needed some brailling done. And, you guessed it, that woman was Nellie Bautista, nee Flores! They had a remarkable reunion and Sally just dug into working with her.

She found out that Nellie had not only graduated from the University of San Carlos, but she had gone on to Manila and obtained a Master’s Degree in Psychology. Nellie is a dynamic person and doesn’t let a thing like being blind cause her distress. She travels a lot, and usually without a companion. She is married and has 4 children. The first children were boys and she said she was going to continue having children until she had a girl. Well, Leila finally arrived after 3 boys and they are all grown now. She tells the story of how she raised her children to keep in touch with her. She expects the littlest one always to keep tapping on something so that she knows where he is. Well, one time one of the youngest decided to hide on mom, and he crawled under a stairwell and kept quiet. Nellie indicated it was quite some time before she was able to locate him. Somehow he decided never to do that again.

Nellie and Sally talked a lot about the status of blind children in Cebu City, and the Philippines in general. The disadvantaged person is hidden away in the house, it being a sign of some failure on the parent’s part that a child has a handicap. Sally and Nellie carried their concern to the political leadership in Cebu City and with the help of the Mayor and a former councilman, Rey Crystal, they secured enough money to open a school in a room in the Cebu State College. The school is called the Cebu Braille Center, CBC, and serves the needs of blind children in the metropolitan area of Cebu City. They were able to obtain donations of several braillers and get them all into working condition. On average there are about 15 children in the school, and many of them go on to college after finishing their schooling. Every time we went back to the Philippines Sally worked with the people at the CBC. 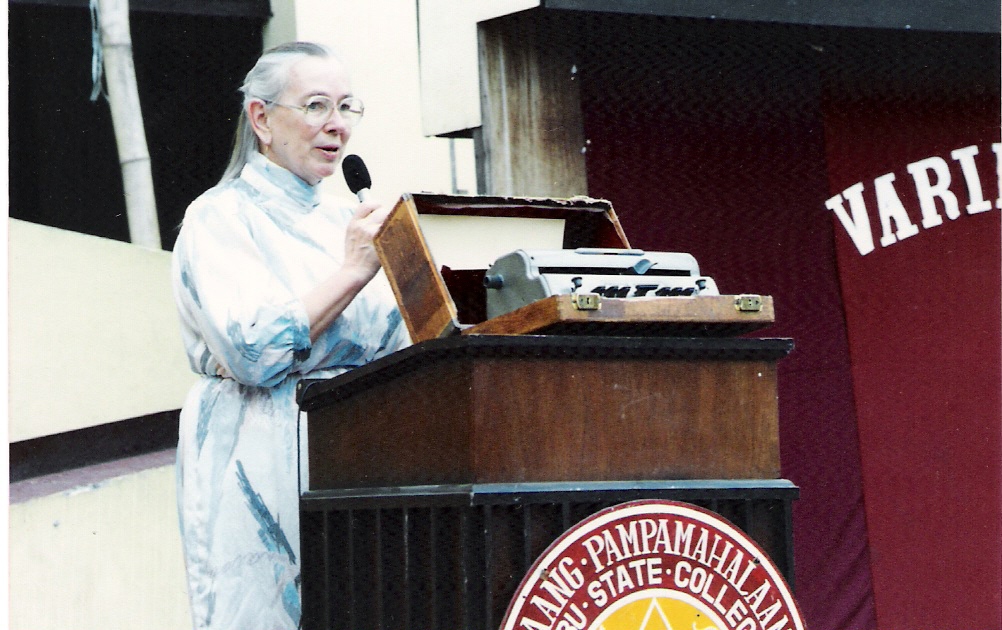 When the CBC was started it was necessary to train some people to be braillists. Sally took it upon herself to do the training and after some months work four of them graduated from her school. They could only hire three, so one had to be dropped, and that caused a good deal of hurt feelings. Of the other three one went on to get her Masters Degree in teaching at the University of Manila. Some year’s later one more left, but at last recording one of the original braillists is still with the Center. The picture shows Sally getting an award from the Cebu State College for her efforts on behalf of blind people in the Philippines. 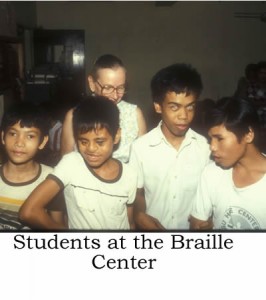 Here is a picture of Sally at the braille center and four of the students. In later years after Sally and me, and then my grandchildren and I, visited the center we were able to ascertain that all was still proceeding and students were graduating and entering college.

I met many good people while in the Philippines, among them of course was Vic Seno, Dennis Bermejo and Philip Wong-Marcon. My life was enriched by their friendship and we continue contact, although sporadic.

The semester ended in the Philippines in early April. We stayed a couple of weeks more and then headed back to Syracuse. I had agreed to be the Academic Chairman at the Poughkeepsie Center and I wanted to get back in time to set up the summer courses. Ted Bickart was leaving the position and I took it over from him.